Woman, I can hardly express
My mixed emotions and my thoughtlessness


After all, I'm forever in your debt
And woman, I will try to express my inner feelings and thankfulness
For showing me the meaning of success

The above is part of a song by John Lennon.  Have listened to four women presenting difference issues of woman, in particular, Lesbian, remind me about this song. It's seem John Lennon very much appreciate and praise a particular woman. But what I have learnt from Jennifer (Taiwan), Dana (Mainland China), Hiromi (Japan) and JJ (Philippines), there are no such romantic consideration in the society toward women, again, and particularly a lesbian.
In the Chinese society for instance and ( almost all Eastern cultural background, women have many barriers to express themselves in term of sexuality. Talking freely about vagina only is not possible. Don't mentioned about talking or discussing sex, will been considerate slut. (Refer to Jennifer presentation). So if the late John Lennon hardly express his thoughts, feelings and gratitude, most of women in Taiwan (actually anywhere else), feel difficult to express her own feeling about sexuality and her own body.
However this situation has encouraged Jennifer and other to do something important and make a change.  Among their activities are:
Next presenter, Dana also share about China Lala Alliances (CLA) which to facilitated Chinese lesbian. They have Lala Camp in several cities in China. This provide a network for lesbian women to learnt and growth.
When come to Hiromi who is a lecturer for mid wife in Japan, we learnt about the same taboo for women to express their own body. This difficulty often created a problem for lesbian women when they need a medical treatment. How to talk to the health care provider and how to discuss partner's health conditions openly for instance.
To be honest, as a lesbian, I never considered her speak title: The Interaction between health provider and lesbian clients in Japanese medical setting" as an issue before, and this arouse my awareness.
Hiromi has identified the need and importance for health care professional to treat clients equally in spike of their sexual orientation.
In Hiromi's study, she found out that in Japan medical setting, generally lesbian dosen't come out to their health provider. And, at the other hand, health care professional only know the existing of LGBT from test book. Statistic also show that from 467 respondents (hospital), only 96 answer yes, that they have interacted with LGBT with distribution of 31 transgender, 20 intersex, 19 gays and only 13 lesbian.
The last speaker, JJ bring an even deeper women problem. "If you are poor and you are butch. Your problem will more unbearable." JJ told the workshop's participants. Getting a job in developing country like Philippines is not any simple matter. Even harder for 'tomboy' or mostly known as stone butch or butch.
Off course all the misfortune JJ have seen didn't make her eyes closed. She is building what she called LBTTs movement in Baqua, Philippines.
JJ's slides display several pictures of these 'tomboy' in the background of poverty.
Posted by: Ernest J.K. Wen 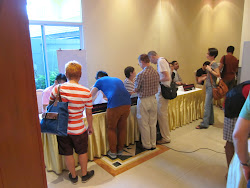 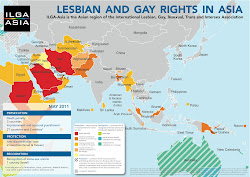